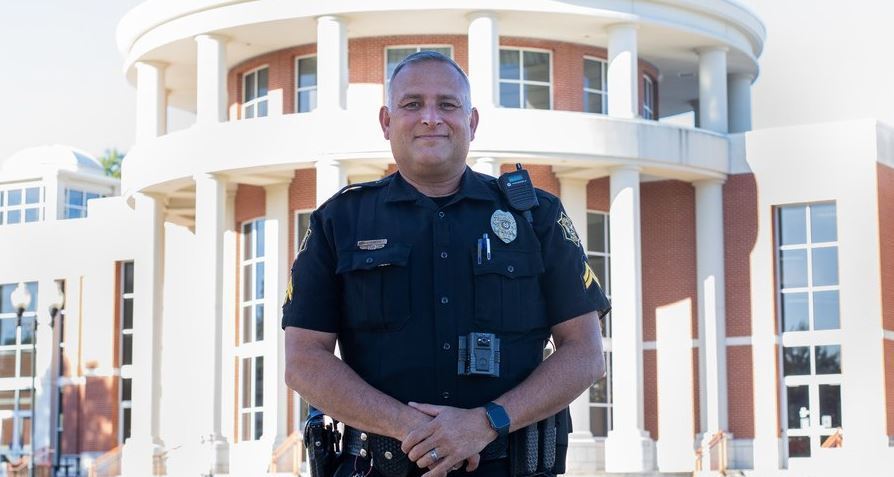 John Scott had served in law enforcement for 22 years when he was given an assignment he was told was “perfect for me.” The trouble was, he didn’t see it that way. But, after a month of teaching in the Springdale High School Law Academy, Scott realized how perfect his new position was.

“I loved doing training in the police department,” Scott says. “I love teaching and sharing the knowledge I’ve picked up through the years. I had trained officers for four and a half years when the position came open to teach in the Law Academy at Springdale High School.

“I was told the job would be perfect for me because I was a good teacher but I didn’t think I would have enough patience to work with kids. After a month at the school my attitude changed and I fell in love with teaching high school students. They were so welcoming.”

Scott teaches two classes a day to juniors taking Fundamentals of Law Enforcement. He also serves as a student resource officer at SHS. In his third year in his current position, Scott still appreciates the welcoming environment.

“The image of law enforcement in our schools is very positive,” Scott says. “The students at the high school love us, the have fun with us, they engage with us and they communicate well with us. They feel comfortable telling us what their needs are and we do everything we can to help meet those needs.

“The Springdale police department and Springdale School District support the SROs. The administration at Springdale High School is wonderful. We are here for them and they are here for us. It is a great community.”

Scott utilizes one of his talents to build a deeper bond with the SHS staff. He cooks lunch for them on a semi-regular basis.

“My wife, Melissa, and I love to cook,” Scott explains. “On Sundays we map out our meals for the week. Today I have fajitas and rice for lunch. Everyone in the office is envious. Every Friday a staff member or an SRO is responsible for furnishing lunch for the principal, assistant principals and ladies in the office.

“Most Fridays whoever is responsible will order pizzas but when it’s my turn I cook something and bring it. I include some for the nurses and the attendance staff. This week I am either going to make chili or tacos. When I make chili I will bring about six pounds of it and it is always gone by the time the day is over.”

Scott receives plenty of satisfaction when he cooks but even more when he witnesses the progress of students in the Law Academy.

“We have about 140 students in the Law Academy and 46 are in the classes I teach,” Scott says. “Sophomores take Introduction to Criminal Justice and seniors take Introduction to Criminal Law. They receive various certificates during the time they are in the academy. That gives them a head start when they graduate. In fact, they can go right into areas of law enforcement like dispatching or working in a jail.

“Two of last year’s graduates are already serving as dispatchers for the Springdale police. They start with good salaries and excellent benefits. In Arkansas you have to be 21 to join the police force. Serving in the jail or as a dispatcher provides valuable experience for those who want to join the police when they are 21. We believe what we are teaching them allows them to bridge the gap between when they graduate from high school and when they turn 21 and can become an officer.”

Of course, students in the SHS Law Academy are well versed in several areas long before they graduate. They are tested in handcuffing, dealing with felony traffic stops, and DWI testing and are trained to stop the bleeding when encountering someone who has been wounded as well as dealing with an active shooter, among other things.

“Training has been a little different this year because of COVID,” Scott says. “We are just finishing testing for handcuffing. Everyone wears rubber gloves and face coverings, we do it outside, we rotate partners so no two students are close to each other for more than 10 minutes, and when we are done we sanitize everything. To be fair, I don’t judge them. SROs from other schools will come and do the judging.”

While training officers and now students is enjoyable for Scott, his career didn’t begin as a policeman. After he graduated from high school he went straight into the military.

“I graduated from McDonald County High School in Missouri, just north of the Arkansas line, and joined the army,” Scott recalls. “I was in Operation Desert Storm and trained all over the world. I helped train Thailand’s military when I was stationed in Fairbanks, Alaska. They are wonderful people in Thailand.

“I loved being stationed in Alaska. The winters were cold but weren’t so bad because I loved to ski. The summers were great. The sun would be up at 3:30 in the morning. It was hardly ever dark. I had been in the army eight years, my time in Alaska was over and I wanted to be stationed in Colorado. When that didn’t work out I came home and joined the police force.”

He served with the Bella Vista police for 12 years before moving to Springdale. He notes, “Springdale is a larger community with more opportunities on the police force. I served on patrol and in the traffic division recreating accidents. That was tough because many times the accidents involved death. I was training officers when I took the position at Springdale High School.”

Since an officer’s career lasts 28 years and Scott has just three years remaining before hitting that mark, what does he plan to do when he retires from the force?

“I’m already working on it,” responds Scott, who earned his associate’s degree from Northwest Arkansas Community College and his degree in organizational management from John Brown University. “I want to teach.

“Each of our students does a portfolio and part of that is writing letters. I read those letters. When I read a letter that said, ‘I never had a dad but if I did I would want him to be like Corporal Scott’ it brought tears to my eyes. So, this summer I decided to give our students all of me. I went to Little Rock to take classes to get a teacher’s license. I’m now certified.

“We are able to do a lot in the Law Academy but we can do much more with another certified technician. Obviously it would be up to the district administration and the school board but I would love to continue to teach in the Law Academy full time.”