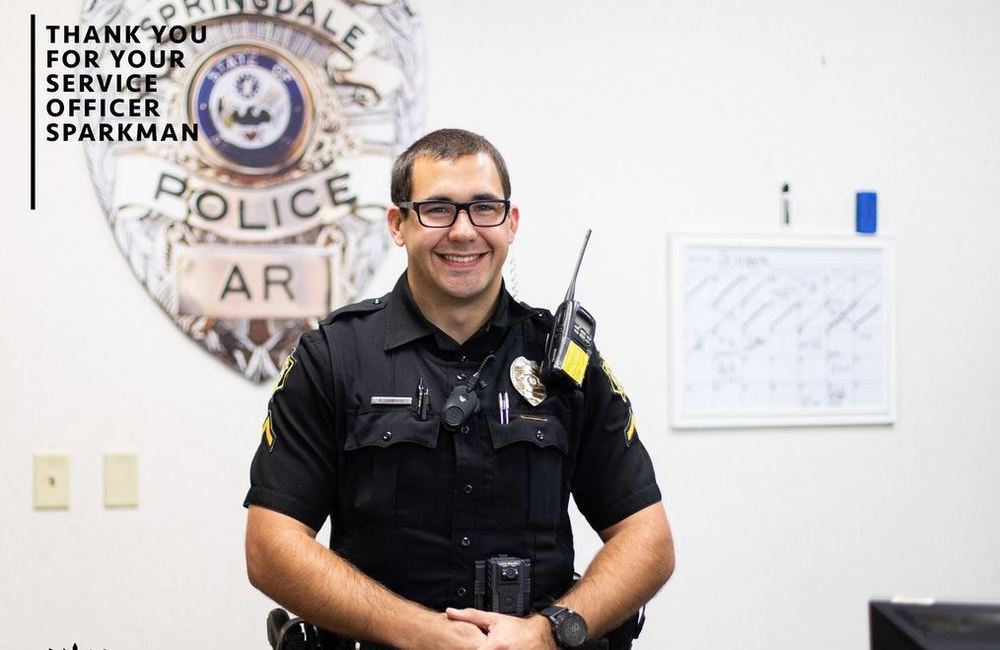 Michael Sparkman learned a lot from football as well as jail as he was being prepared for a career in law enforcement. Both helped launch him onto the Springdale Police Force and a position as a student resource officer at Springdale High School.

“I wouldn’t be where I am today if it weren’t for the football coaches at Har-Ber High School,” says Sparkman, who was a linebacker and special teams player on the Wildcats’ 2009 state championship team. “Coach (Chris) Wood and the assistant coaches instilled a deep connection to the team. No one was looking to get recognition. We just wanted to get the job done.”

Wood says, “Michael did whatever he could to help the team. He was focused, driven and had a servant’s heart. You never know what your players will do professionally but it doesn’t surprise me that Michael is a police officer. He always wants to help people.”

Sparkman received an early lesson in helping people when he served as a jailer before he was old enough to join the police force.

“After I graduated from Har-Ber I went to the University of Arkansas to study engineering,” Sparkman explains. “One of the requirements was to job shadow someone in the engineering field. The person I shadowed sat behind a desk in front of a computer all day. I love the outdoors and like to keep moving. I couldn’t see myself doing that. The nine-to-five job didn’t jive for me.

“So, my life was at a crossroads. I like being a person who someone calls when they need help. A job in a jail opened up and I took it, knowing it would be a good stepping stone for going into law enforcement. I stayed with it until I turned 21.”

What was working at a jail like for a 19-year-old?

“It was a shock,” he responds. “I was not as aware of the world as I had previously thought. Working there changed my outlook, though. There is a stigma attached to those who are arrested. They aren’t all bad people. Some just make a mistake. Some just fail to pay a ticket.

“I would talk to them. I would hear their stories and talk to them as people, not prisoners. It taught me how to talk to people.”

Sparkman already had solid communication skills. At Har-Ber he was a member of the debate team coached by Taneisha Wright.

“She was a great teacher,” Sparkman says. “She taught us critical thinking. I wasn’t very good at debate. I could think on my feet but you had to be prepared to defend both sides of an issue. I wasn’t good at rebuttals when defending things I don’t believe in.”

He does believe in defending innocent people. The day after he turned 21, Sparkman joined the Springdale Police and served on patrol until becoming an SRO at the beginning of the current academic year.

“When you work the streets and someone calls, it is usually because they are having one of the worst days they’ve ever had. You always expect to deal with adults but when there are kids in the area, it’s a hundred times more tough. I can see the effect the actions of adults are having on kids.”

His empathy for kids is one of the reasons he became an SRO. After two years in the narcotics division and time on patrol and crime suppression, he took the position at SHS, alongside John Scott, who is in his third year at the school.

“I can remember seeing the SROs in the halls at Har-Ber and the little things they did,” Sparkman says. “They were very helpful to the students and staff. I like being an SRO. Counting students and staff we have over 2,000 people at Springdale High School. It’s like our own little city within the city of Springdale. It’s much more personal than being on the streets where there are 80,000 people over 46 square miles.

“We get to know the students. With today’s political climate I like to be able to have conversations with students and answer the questions they have.”

Growing up in Springdale, Sparkman’s questions were about when he and his parents would be outdoors again.

“My dad loved the outdoors and we were always out,” Sparkman remembers. “We would fish, hunt and hike. That’s all I ever knew. Northwest Arkansas is a hidden gem for the outdoors. I have friends in California who ask about moving here. I tell them how great it is and that they should check it out. But, no one else is allowed. We want to keep the area as a gem.

“Northwest Arkansas is a metroplex with over 500,000 people in the area but I can drive 15 minutes and be out of cell service. I can drive two hours and hear the elk’s bugle. This is a great place.”

Married to a former Har-Ber cheerleader, he and his wife, Amber, have two children, ages two and four. Still, he is finding time to work on an associate’s degree online and expects to have earned it by this spring.

“I’m taking 15 hours online through Eastern Gateway Community College,” Sparkman says. “The school accepts hours from our training at police academy toward the associate’s degree. That allows me to finish sooner. Eventually I will work on a degree in criminal justice. You only need a high school degree to become a police officer but if you get hurt, you need a fallback plan.”

Sparkman’s fallback plan for now is becoming a Springdale Bulldog, not easy for a Har-Ber Wildcat.

“I know the Har-Ber alma mater word for word because the coaches demanded it,” Sparkman says. “We competed at the highest level because of the character our coaches developed in us. But, I am a Bulldog now. These are our kids. I will do anything I can to help them.”

With Scott serving as his mentor, Sparkman has been a wonderful addition to the SHS team. He and all the district student resource officers are among the reasons Springdale Public Schools are #THEChoice #SHShoutOut.